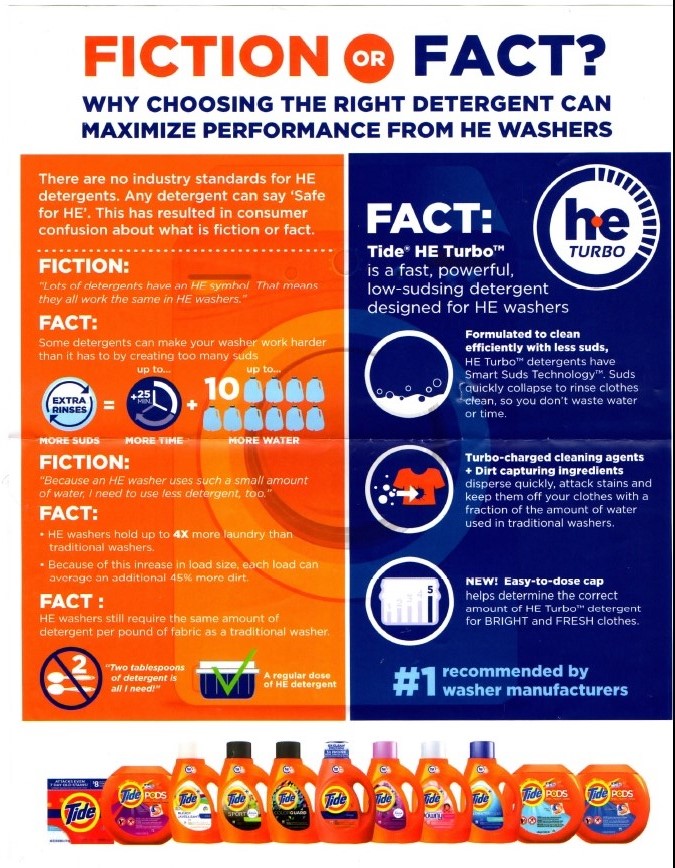 How much laundry detergent?

How much laundry detergent to use in a Front Load Washer

Here’s a flyer that Tide was giving out at the recent ASTI convention in Miami regarding how much laundry detergent to use. If you look to the lower left corner of the page, it says that it’s “fiction” that you should only use 2 tbsp of detergent in your high efficiency (HE) washing machine. This caught my eye, because just an hour before while attending the latest and greatest LG training class we were told specifically by the instructor, John, that 2 Tbsp of detergent was how much laundry detergent to use in the LG front load washer that he pointed to at the front of the class. 2 Teaspoons for the new side kick pedestal washer.

So the saga continues, detergent manufacturers are trying to sell product, it’s their job. And we’re going against what they are saying and telling you to use less. So who’s correct here?

Personally I trust the manufacturers more than the detergent companies.

I was able to speak with the Tide representatives about the labeling while I was there at least. We were talking and I brought up that some of the labels stated “HE” and other labels stated “safe for all washers, including HE”. I asked if the formulas were the same and they said pretty much but some were more concentrated than others. They told me that there are no regulations on soap labeling so it’s pretty much whatever whoever feels like labeling the package at the time with no rhyme or reason to the label. We didn’t get into how much detergent to use because I think that would have started a no win argument on either side. I do find it coincidental that the capsules or monodoses contain what looks like to be about 2 Tbsp of detergent.

I Don’t trust the company’s advise

So what’s this mean to us? Well it seems that you can’t trust someone selling detergents to tell you how much laundry detergent to use. That should be a no brainer but it’s one of the biggest arguments that we have to contend with on a daily basis. We stand there, in front of a customer, telling them “YOU HAVE TO USE THE RIGHT DETERGENT, IT’S NOT SOAP!”. To which we usually get the response of “I’ve been washing clothes for 50 years, what the hell do you know?” or I can see it go in one ear and out the other right there in front of me.

Problems with using too much detergent, or the wrong type

Well what do I know? I know that excessive suds causes problems, soaps cause problems, and generally anything that claims to save the environment usually has the same effect of adding a few bowling balls to your washer. I’ve only seen 1 that didn’t totally screw up the washer but times are changing and I think they’re coming around. Bearing burnouts, pump burnouts, pressure sensor freakouts, slime, smells, bacteria coatings a catalyst for electrolysis in the washer are some of the issues from using the wrong or too much detergent or lye based soaps.

So for now, until further notice, use 2 tablespoons of HE detergent in your front load washers. Stick with Tide or Woolite brands. If you want them to smell prettier add a fragrance packet for now. A year from now I may be back on the soap box (see what I did there) complaining about those as they are fairly new but that’s the best advise I can give at the moment.

Back to Main Site