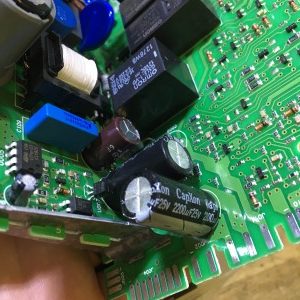 It seems to come in waves. In the last month I’ve had 2 duet sports that have had the F35 error codes being thrown. The code is simple enough, “Analog pressure sensor” is what the tech guide says, saying to replace the sensor and it will fix it. The sensor connects with a small hose to thebottom of the washer and is used to detect how much water is in the washer so it knows when to stop filling, stop draining and finally to spin. If the sensor is showing that it’s full for too long it give an F35 or suds error. Whirlpool gives no test on how to test the sensor and simply says to replace it, nothing else. That’s easy for them to say when they’re selling you the parts at about $100 that may or may not fix the problem and is non returnable after installation. These are from 2 washers in Mandeville that I’ve repaired the hard way. That is to repair the control board. The boards are no longer available from the manufacturer so they basically are saying to buy a new washer. I know these customers can get more use out of their washing machines and was interested in finding a fix for this.

The first washer showing the F35 error we were about to go on a 4 day weekend. I didn’t want to leave this customer without a washer for the weekend nor tell them they had to replace a machine that may have a few years left in it. Determined to know what was going on with this I explained the situation to the customer. I told him I’d keep trying if he wanted me to and I decided to pull the control board. When I did I noticed two ever so slightly popped capacitors. I tested them with my cap tester and sure enough I got nothing. I keep a stash of capacitors back at home base and thought I may have some but stopped at radio crap to see if they had any. They didn’t. But, I was able to round up some capacitors that I had laying around from one of my alien autopsy nights and install them. I brought the board back, installed it and it worked. Success! So here it is the fix to the F35 suds error.

The original capacitors were rated at 10 vdc. I think this is the problem. Appliances generally operate on 5vdc, 12vdc, and 120vac, AC and DC voltage. So if this one is operating at 5 volts it’s at 50% of it’s rated capacity all of the time. I changed them to 25 volts bringing the rated capacity factor down to 20% so I’d expect them to outlast the machine. I don’t know if that’s the case but it’s my theory, for now.